“Sometimes we don’t know how to face our fears. And sometimes, the solution appears allusively.”

This is a story about a graphic designer who’s cured of Trypanophobia after making a series of biotech projects. Call her Anin. When she was a tiny girl, she frequently made a check-up to the dentist. She had genetic issues that caused a cavity on her teeth.

Anin didn’t have privilege just as a sweet-tooth kid at her age. One moment, rebelliously, she tried cotton candy. She knew it’d troubled her, but she couldn’t resist the desire. Not-so-long hereafter, she met with her biggest fear that would haunt her forever.

A needle. She has an excessive fear of it and she’s so afraid of getting an injection. This was changing until she became a specialist in biotech design.

It began in September when she waited for lunch in the office. As usual, she ordered her meal online. On that day, which was probably her unfortunate, the meal took over half an hour to arrive. She didn’t do anything but play with Wellie, our spoiled cat. Dragged a furred toy across the floor on a string, paused as an animal might, she encouraged it to stalk and pounce.

The lunch break would end in 15 minutes. At that exact point, John Stewart sent an e-mail.

“Hi. I work for Stratford Capital and need to make a pitch-deck for Aegros. They’re a group of scientists who wants to grow their market in Qatar. I’ve made the raw presentation in total of 28 slides with 16:9 ratio aspects. Please redesign it using a light background color. Thank you.”

Anin, despite her meal wasn’t coming yet, has a convincing look to run it. If you’ve ever knew the smartest person in your class, then that’s what she looks like. Glasses and soft-colored sweater. Books and sticky-notes on her table.

She surfed the net to get some sort of facts about Aegros. She found that namely terminology was derived from Latin for ‘Patient’. In the website of that company, they claimed, “Every day we strive to place the patient 1st by providing therapeutic plasma products they would not otherwise be able to access.”

It only takes 20 to 60 seconds for a drop of blood to travel from the heart, through the body, and back to the heart again. With that short amount of time, Anin successfully finished to self-study the materials and got these concepts:

Dark blue, both symbolically and medically the opposite of red in its effects. It raises the value in spiritual healing, meditation, and devotional services. Different from light-blue that brings mildness and width nuance, this color can show the depth in which can define the scientist well-comprehension, for the reason that they have specific expertise in medics. The color perfectly suited with Aegros and Stratford Capital (they use blue for their web.) Furthermore, Anin properly used the doctor stock photo to refine the slides, it shows the niche within its particular profession. In a nutshell, these combos made the deck perfectly so-scientific-looking.

To enhance the Aegros identity, Anin unified hemoglobin 3D vector. Maybe you’ll see it like a doughnut with no hole. Since the company has goodwill to develop and become the market leader in the emerging therapeutic plasma markets, then it’s important to put an illustration to make the audience acknowledged what that actually is. Obviously, either I and you, don’t want to open a biology encyclopedia. Thus, Anin simply put that blood vector, for the sake that a regular person can get the topic easily. Speaking of blood, Anin had two choices whether to make it so medical or so gore-y. Fortunately, she picked the first one.

Rather than display a group member with their tiny close-up photo in also tiny hierarchy list, Anin made it more photogenic. This could remind the audience of a family photo in a frame. It could portray togetherness. All inside a single clean style slide. And it looks more beautiful because of that light-shadowy effect in curvy-placeholder. All the personnel had a decent smile though.

Science denotes such a wide range of complex activities, that is always close with the words systematic and evidence. Those who love them are nerds or a sort of professor. There’d be a high percentage that a marketer hates them. Hopefully, Anin realized it, so that she made the time-table process with sheer simplicity. Look, that’s a mere a straight line, with blue dots and tight phrases, directly go to the goal end. I believe before it’s transformed in PowerPoint, it’s more confusing than a knot of infinite threads.

Anin finished Stewart’s order before 4 p.m. Sadly to say, her stomach didn’t get the nutrient yet. In starve, she got the flashback that she had an unpleasant experience, that she might not even be able to look at a picture of a needle. But just some hours ago, she got touched—even in an indirect way—with her fear. Doctor. Needle. Anything between them. With graphic design, she might undertake behavioral therapy as well. It turned out to help managing the negative thoughts of her phobia. Slowly but surely, after more and more of bio-tech design, maybe she could kick her fears out.

How to Be Productive at Work, Have A Cat! (featuring with animal presentation template)
February 14, 2020

12 Common Behaviors of Clients in A Creative Agency
February 3, 2020 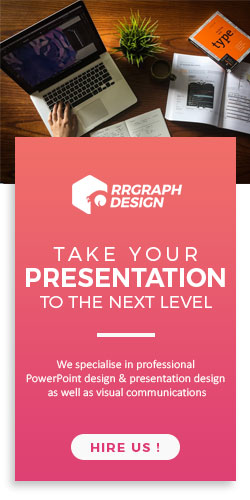