Everyone has 24 hours per day. 8 hours to work. 8 hours to rest. And the least 8 hours to have actual time for ‘living’. Then, if we do our presentation design service to remake 19.000+ slides in a year, how long does it take to make a single slide?

Scattered sticky notes all over the desk to keep things in mind.

2 hours in approximate. A single of your ordered slide has the same time amount as a football game or an episode from Netflix.

Balancing life with a bit of sport, badminton on Thursday.

We might say we have created 38.000+ PowerPoint slides consistently before this year ends. Seeing that number make us thrilled. With less than 20 designers, the result actually is out of our limit. Otherwise, without pushing our ability, we’ll never can buy food for Wellie (our bratty-yet-lovely-cat), that she has spent 14 kilograms feline snack.

Welly posing as she is the model for cat food package.

What else? The 2 of our employees were on pregnancy and had a born for 2 babies. Alias we have 2 mammas in the team. Amid of this year, before the rainy season comes, we moved our homelike office into an industrial sort of building that has a wall to play darts and an open rooftop to see the reddish sky during the sunset. An extra 10 members were joined hereafter. Which means more and more laughs, sweats, and intensities.

Darts on the wall, along with tiny holes marking our failure attempts.

We think it’s clear, that frustrating is on everybody’s lips when it comes to intensity. Then and there, caffeine comes along as an aid. Our 9-to-5 focused mind comes from nothing but 3780 cups of coffee throughout hundreds of mornings, to keep 875+ projects from 40+ countries run smoothly.

Black coffee every morning to keep our focus and sanity.

Habituating that namely morning routines, there’s a mere idea to start our own café, starting with buying the grinder machine ourselves. We’ve been wanting it for too long as our piggy bank becoming fatter and fatter after 3500+ templates have sold at the marketplace and we’ve made 5900+ deals achievement in this year. Of the total figure, probably the price is nothing to compare with what another company has accomplished. Nonetheless, behind those worldly accountabilities, there’s a process and value that can’t be measured. Progression never talks in math, right?

Nothing is better than making brunch in our own kitchen.

As might happen to our 28 members, as twice or triplet or quadruplet we multiply our whole creative ideals, nobody still can tell how great is our quality. Even the clients, as the place where our products end. Because, how on earth is possible to bring up the clients’ satisfaction into ratio?

At that point, neither 9 out of 10 stars rate nor 355.455+ viewers on YouTube aren’t the determinant. We’ll never deliberately write that those numbers are our crucial target. It’s only “Oh that’s kind of interesting!” moment as reminder, so that we’ll know when to push and take a pause.

It’s such a remedy to go on playstation game after finishing daily duty.

Encircling 365 days again in 2020, our company also will celebrate its 5th years anniversary. Besides thousands of presentation slides and more kilograms of cat’s food, there’ll be the other thousands of sticky notes, hundreds of cracked shuttlecock on badminton game, tons of football match rivalries, and more PUBG battle royal that come in our way. Though they might seem slightly important, without them, we’ll never reach our milestones. And too your everlasting support, without it, we’ll never be the RRGraph just like today.

The sky is grey and murky, but it’ll pass as we keep believing ourselves.

PrevPreviousHow to Survive in Your First Week Office Job!
Next15 Best PowerPoint and Keynote Template in 2020Next 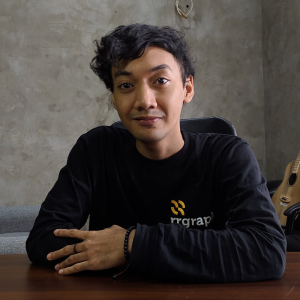